This site is owned by FCC Group (the Website) and it uses Cookies to understand which sections you find most interesting and useful, to secure the Website, to show you our locations and play online videos, and to maintain the preferences you select. Cookies contain information that is stored in your browser so that you will be recognised when you return to the Website.

You can then either i) manage the cookies you want to be installed on your computer or ii) accept all cookies.

EnergyLOOP will locate its innovative wind turbine blade recycling facility in Navarra, in the municipality of Cortes 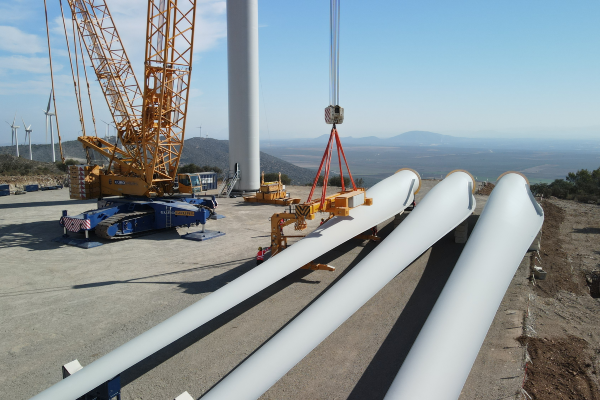 EnergyLOOP, a company promoted by Iberdrola, through its PERSEO programme, and FCC Ámbito, a subsidiary of FCC Servicios Medio Ambiente, will build its innovative wind turbine blade recycling facility in Spain in the municipality of Cortes, Navarre.

La Ribera Navarra will thus be the place chosen to lead the recycling of wind farm components, one of the biggest challenges in the medium and long term for the sector. This initiative will also contribute to the energy transition and boost the circular economy in Spain.

It is a pioneering facility in the recycling of wind turbine blades, mainly made up of composites (glass and carbon fibres and resins), for the recovery of these materials as secondary raw materials in different sectors such as the energy, aerospace, automotive, textile, chemical and construction industries.

The plant's location is strategic due to its proximity to some of the country's leading wind farms and its good communication with other regions with abundant wind energy facilities, and to the support of the Government of Navarre and the public company Sodena, which have shown their interest in this strategic activity that positions the region as a benchmark in the renewable energy sector.

Construction is scheduled to begin in autumn 2023 and the plant is expected to be operational in 2024.

The facility will be the first industrial-scale plant in Europe and will place Spain at the technological forefront of this industry. It will also contribute to the creation of an innovative and dynamic value chain. To this end, EnergyLOOP expects to create around 100 direct and indirect jobs over the decade and plans to invest around €10 million in the facility.

For the development of its industrial commitment, EnergyLOOP has appointed Luis Sanz Jiménez, who has extensive experience in the recycling industry, as Managing Director of the company. In addition, in his long professional career, Luis Sanz Jiménez has led ambitious and innovative industrial projects for the recovery of materials and their incorporation into the market.

The project has the support of the Government of Navarra, as it is a strategic activity that positions the region at the forefront of the renewable energy sector by introducing technological innovation and circularity components and is aligned with regional smart specialisation. In its commitment to the promotion and competitiveness of renewable energies, the Government of Navarre, through Sodena, has worked discreetly on the location of the first plant of this activity in the region, in an industrial estate owned by the also public company Nasuvinsa.

The Government of Navarra's S4 smart specialisation strategy incorporates the circular economy by focusing efforts and bringing together public and private actors under the umbrella of Navarra Zirkular, with the aim of facilitating the ecological transition in companies located in the region.

The Spanish wind industry - as a world leader with more than 28 GW of installed capacity - will face the need to recycle or reuse significant quantities of wind turbines before other countries. It is estimated that around 5,700 wind turbines per year will be dismantled in Europe by 2030, from the repowering of wind farms or installations reaching the end of their useful life.

In this context, EnergyLOOP will contribute to the transformation of the wind energy sector into a truly circular economy by investing in integrated blade recycling solutions. This initiative will also improve its competitiveness and sustainability through the research and implementation of new recycling technologies, which will make it possible to absorb the increasing amounts of waste and adopt increasingly efficient solutions.

The project will act in the different stages that enable the circularity of wind turbine blades, including on-site pre-treatment and conditioning, waste transport logistics, recycling technologies and the marketing of recycled products.

Collaboration agreements with leading companies in their sectors

The initiative undertaken by Iberdrola and FCC Ámbito has the support of Siemens Gamesa, which, as a global leader in the manufacture and maintenance of wind farms, will play a key role in this project, both because of its knowledge and experience in blade recycling and because of its penetration in Spain, with 53% of all the wind farms installed in the country.

Along the same lines, the company GDES Wind, with extensive experience in operation and maintenance activities in the wind sector, is collaborating with EnergyLOOP by providing technical support and knowledge to EnergyLOOP, as part of its commitment to the circular economy.

EnergyLOOP's activity reinforces the circular economy strategies of FCC Ámbito and Iberdrola, which see this model of production and consumption as a key lever for the energy transition. They will therefore seek to develop equally cutting-edge recycling solutions for other components of renewable facilities, such as solar photovoltaic panels or batteries, as the needs of these markets so require.

With this approach, the new company will seek to establish the necessary alliances for the effective valorisation of waste, extending the positive impact of the initiative to other actors along the entire value chain. It will also contribute to the research and development necessary for the effective circularity of these materials.

FCC Ámbito contributes its extensive experience in the recycling and commercialization of secondary raw materials to the definition of operational processes in the development of EnergyLOOP projects. The incorporation of new technologies in this type of projects will allow FCC Ámbito to consolidate and position itself as a key player in the country's circular economy processes, a fundamental pillar of FCC Medio Ambiente’s 2050 Sustainability Strategy.

This Sustainability Strategy consists of a 30-year business development roadmap that integrates very demanding objectives and commitments with high added value for the company and society as a whole, and which are integrated into four lines of action: environmental, social, excellence and governance.

The circular economy, at the core of the Iberdrola Group's sustainable business model

EnergyLOOP, responds to Iberdrola's commitment to a sustainable energy model, is part of its PERSEO Venture Builder programme to promote the development of innovative industrial companies working in new areas of electrification and in sectors that are difficult to decarbonise.

Iberdrola defines its circular economy strategy as a process that affects its entire value chain, both its own production processes and those of its suppliers and customers. The group prioritises the contracting of companies with environmental management systems and, together with its suppliers, promotes eco-design, the analysis of the life cycle of products, and the use of materials with a low environmental impact.

The company also promotes the circular economy by reducing the use of natural resources through its commitment to decarbonisation and electrification and the more sustainable use of natural resources by promoting the use of more efficient and cleaner technologies and processes. It also encourages research to develop solutions for waste use and promotes responsible consumption through environmental awareness programmes.

In 2017, Iberdrola joined the Pact for a Circular Economy: The commitment of economic and social agents 2018-2020, which the Spanish Government signed with the European Commission within the framework of the European Strategy for Growth 2020 and the so-called Roadmap to a Resource-efficient Europe.

The Pact, which was signed by public and private entities, seeks to involve the main economic and social agents in Spain in the transition towards a new economic model.

Since its creation in 2008, PERSEO has invested €100 million in start-ups that develop innovative technologies and business models, focusing on those that improve the sustainability of the energy sector through further electrification and decarbonisation of the economy.

The programme has focused its activities on analysing business opportunities and technological collaboration with start-ups and emerging companies around the world, analysing 300 companies each year and creating an ecosystem of almost 7,500 entrepreneurial companies. This investment instrument currently holds a portfolio of eight companies.

Through PERSEO, the Venture Builder programme was launched in 2020 with €40 million for the creation of new business models aimed at supporting electrification in sectors that are difficult to decarbonise and the development of circular economy solutions, among others.

FCC Ámbito is the FCC Servicios Medio Ambiente’s subsidiary specialising in the comprehensive management of industrial and commercial waste, recovery of by-products and soil decontamination. As a whole, it has a total of 39 treatment centres in Spain and Portugal, with more than 67 processing lines that guarantee the functionality of the facilities.

FCC Servicios Medio Ambiente is the company within the FCC Group that has been providing municipal services and comprehensive waste management for more than 120 years and serves over 60 million people in 5,200 municipalities around the world. In 2021, the company managed 24 million tonnes of waste and produced around four million tonnes of secondary raw materials and refuse-derived fuel.

The company has more than 770 operational waste management facilities, of which nearly 200 are environmental compounds dedicated to waste treatment and recycling, including 11 waste-to-energy projects with a capacity of 3.2 million tonnes per year and 360 MW of non-fossil electricity.