MAREPA awarded in the IX Edition of the AEPA Awards

MAREPA awarded in the IX Edition of the AEPA Awards 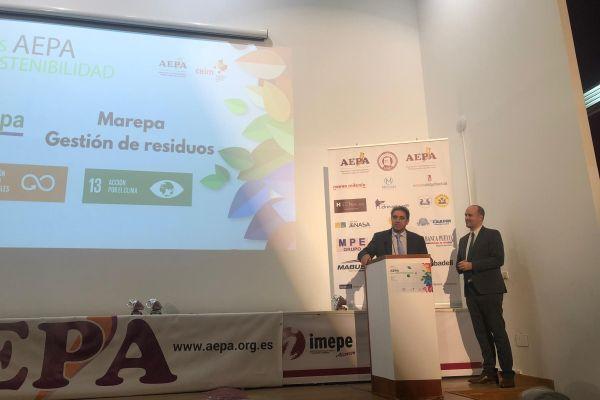 MAREPA, FCC Ámbito subsidiary, specialised in the recovery of paper and cardboard, has been awarded at the IX edition of the awards given by the Businessmen and Professionals of Alcorcón Association (AEPA), with sustainability as the main protagonist.

The event, which took place at the IMEPE Business Centre, was chaired by Miguel Ángel Velarde, general secretary of AEPA, and led by the radio journalist Víctor Alfaro, and has gathered more than 200 guests.

The main part of the gala was the award ceremony encompassed in the 17 United Nations Sustainable Development Goals (SDGs) and which made up a dozen awards. In this way Marepa has been awarded for its responsible consumption and production (SDG12) and for Climate Action (SDG 13).

Javier Montero Sánchez, director of Marepa, was in charge of collecting this award and highlighted that 70% of the paper and cardboard used in Spain is recycled. Marepa is the second company in Spain in the recovery and recycling of paper and cardboard for almost 50 years and manages eight plants with more than 200 employees along the whole country.

After the awards ceremony, different authorities took the floor. Among them, Miguel Garrido, president of CEIM; Rodrigo Tilve, General Director of Economy and Competitiveness of the Community of Madrid; Daniel Rubio, first Deputy Mayor of the City of Alcorcón and Marina Sánchez, president of the Association, who was in charge of closing the session, recalling the importance of sustainability and inviting small and medium-sized enterprises to commit as far as possible to reaching each of the 17 Objectives proposed by the United Nations.

FCC Ámbito belongs to the FCC Environment group of companies that provides environmental services to almost 60 million people in around 5,000 municipalities and has been implementing and undertaking initiatives and good practices for more than 100 years to consolidate a sustainable management model.